This is an overlay of an 1896 Ordnance Survey map onto a modern aerial photograph, giving a clear indication of how the station used to sit within what is now the Old Station Park. Unfortunately, the image from Google Earth is not fully up to date and the playground which was installed in 2007 is not shown. (Update: Google have now updated their aerial image of the park to show the new playground, so I will revise the overlay when I have a chance - Ian)

It can be seen that the footpath used by L&Y workers to get to the loco works via Drinkwater Lane crossed Pearl Brook at the same point that the current footbridge does.

Also visible is a turntable; according to Chris Foley's father (an employee at the Loco works who was instrumental in saving drawings and other documentation for the National Railway Museum) the turntable was never removed and was simply buried. Given the level of the land at that point in the park, this is perfectly feasible.

The end of the platform was at the north corner of the present day artificial pitch.

Horwich Station signalbox is also visible at the bottom left of the image. 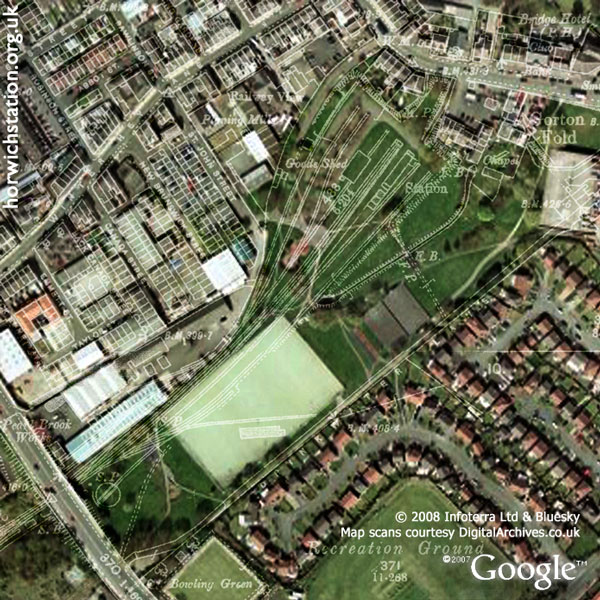 This section of the site is not complete. Still to come: